A LOT OF VIDEOS

THE MIDDLE AGES by Paula Íñigo (2)

Power of the Catholic Church

Power of the Secular Rulers

Interactive Quiz about the Middle Ages (with answers)

Timelines for the Middle Ages

Free Presentations in PowerPoint format about the Middle Ages

Middle Ages Reconquista and Islam in Spain History >> Middle Ages for Kids What was the Reconquista? The Reconquista is the name given to a long series of wars and battles between the Christian Kingdoms and the Muslim Moors for control of the Iberian Peninsula. It lasted for a good portion of the Middle Ages from 718 to 1492. What is the Iberian Peninsula? The Iberian Peninsula is located in the far southwest of Europe. Today the majority of the peninsula includes the countries Spain and Portugal. It is bordered by the Atlantic Ocean, the Mediterranean Sea, and the Pyrenees Mountains. Who were the Moors? The Moors were Muslims who lived in the northern African countries of Morocco and Algeria. They called the land of the Iberian Peninsula “Al-Andalus”. The Moors Invade Europe In 711 the Moors crossed the Mediterranean Sea from North Africa and invaded the Iberian Peninsula. Over the next seven years they advanced into Europe and controlled the majority of the peninsula. The division of the land before Granada was retaken from the Atlas to Freeman’s Historical Geography Start of the Reconquista The Reconquista began in 718 when King Pelayo of the Visigoths defeated the Muslim army in Alcama at the Battle of Covadonga. This was the first significant victory of the Christians over the Moors. Many Battles Over the next several hundred years the Christians and the Moors would do battle. Charlemagne would halt the Moors advance at the borders of France, but taking back the peninsula would take over 700 years. There were many battles won and lost on both sides. Both sides also experienced internal struggles for power and civil war. The Catholic Church During the latter part of the Reconquista it was considered a holy war similar to the Crusades. The Catholic Church wanted the Muslims removed from Europe. Several military orders of the church such as the Order of Santiago and the Knights Templar fought in the Reconquista. Fall of Granada After years of fighting, the nation of Spain was united when King Ferdinand of Aragon and Queen Isabella I of Castile were married in 1469. The land of Granada was still ruled by the Moors, however. Ferdinand and Isabella then turned their united forces on Grenada, taking it back in 1492 and ending the Reconquista. The Moors surrendering to Ferdinand and Isabella by Francisco Pradilla Ortiz Timeline of the Reconquista 711 – The Moors conquer the Iberian Peninsula. 718 – The Reconquista begins with the victory of Pelayo at the Battle of Covadonga. 721 – The Moors are turned back from France with a defeat at the Battle of Toulouse. 791 – King Alfonso II becomes King of Asterieas. He will firmly establish the kingdom in northern Iberia. 930 to 950 – The King of Leon defeats the Moors in several battles. 950 – The Duchy of Castile is established as an independent Christian state. 1085 – Christian warriors capture Toledo. 1086 – The Almoravids arrive from North Africa to help the Moors in pushing back the Christians. 1094 – El Cid takes control of Valencia. 1143 – The Kingdom of Portugal is established. 1236 – By this date half of Iberia had been retaken by Christian forces. 1309 – Fernando IV takes Gibraltar. 1468 – Ferdinand and Isabella unite Castile and Aragon into a single united Spain. 1492 – The Reconquista is complete with the fall of Granada. Interesting Facts about the Reconquista During the Second Crusade, Crusaders passing through Portugal helped the Portuguese army to retake Lisbon from the Moors. The national hero of Spain, El Cid, fought against the Moors and took control of the city of Valencia in 1094. King Ferdinand and Queen Isabella were called the “Catholic Monarchs”. It was Ferdinand and Isabella who authorized the expedition of Christopher Columbus in 1492. After the Reconquista, Muslims and Jews who lived in Spain were forced to convert to Christianity or they were expelled from the country. Take a ten question quiz about this page. More subjects on the Middle Ages: Overview Timeline Feudal System Guilds Medieval Monasteries Glossary and Terms Knights and Castles Becoming a Knight Castles History of Knights Knight’s Armor and Weapons Knight’s coat of arms Tournaments, Jousts, and Chivalry Culture Daily Life in the Middle Ages Middle Ages Art and Literature The Catholic Church and Cathedrals Entertainment and Music The King’s Court Major Events The Black Death The Crusades Hundred Years War Magna Carta Norman Conquest of 1066 Reconquista of Spain Wars of the Roses Nations Anglo-Saxons Byzantine Empire The Franks Kievan Rus Vikings for kids People Alfred the Great Charlemagne Genghis Khan Joan of Arc Justinian I Marco Polo Saint Francis of Assisi William the Conqueror Famous Queens

Read more at: http://www.ducksters.com/history/middle_ages/reconquista.php
This text is Copyright © Ducksters. Do not use without permission.

The Medieval era in our country was characterised by the succession of different peoples and religions that contributed to Spanish culture. Visigoths, Moors, Christians from the north and Sephardic Jews all had an impact on the history of Spain. Studying this period will enable us to understand the origins of Spain and, at the same time, to see how the cultural legacy left by these people is still present in our art, language and literature, as well as our borders, place names and many of our flags.

The Middle Ages began with the fall of the Western Roman empire in the year (476). Until then, the Iberian Peninsula had been occupied by a number of Germanic peoples. However, it was the Visigoths who eventually dominated the ancient province of Hispania and who created the Kingdom of Toledo in the 6th century.

the Visigoth king Recesvinto (653-672), whose votive crown is part of the Treasure of Guarrazar, granted the bishops and magnates the power to choose their kings. The fact that the Visigoth monarch was elected caused serious power struggles.

The Visigoths arriving on the Peninsula eventually mixed with the Hispanic-Romans (native population). The vast majority lived in the countryside, because people left the cities during the final stage of the Roman Empire.

Among the minority Visigoth ruling class were the monarchs, the warrior aristocracy and the clergy. The peasants and the slaves made up most of the population.

In 711, the Muslim troops, comprising Berbers and Arabs, arrived on the Peninsula. After defeating the Spanish king Rodrigo (710-711) at the Battle of Guadalete, they set about conquering the majority of the Peninsula.

For more information about the Battle of Guadalete, visit the Grandes batallas website [See].

Gibraltar got its name from Jabal al Tariq, in other words, “Tariq mountain”. Tradition has it that this is where the Berber military leader,Tariq ibn Ziyad, landed with this troops in the year 711.

The Muslims called the Iberian peninsula Al-Andalus and converted it into a province or Emirate of the Islamic Empire. The capital was Cordoba, where the government or emir lived. 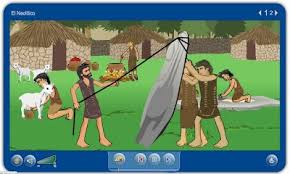 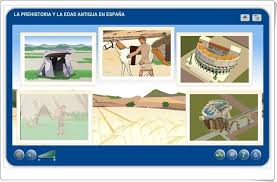 The stages of pre-history

The longest stage in the history of humanity. It extends from the appearance of the first human beings (2.5 million BC) until the invention of writing (3500 BC). It is subdivided into three periods:

begins with the appearance of the first human beings (2.5 million BC) and ends with the discovery of agriculture (10000 BC). This is the longest and oldest period of pre-history.

During this period they used tools made of stone, bone and wood. Humans formed small groups of hunter-gatherer nomads, which moved around in search of animals to hunt, fruits and wild plants. They took refuge in caves and natural shelters, which they decorated with cave paintings.

During this stage, humans learned to cultivate cereals and legumes, and to domesticate animals such as dogs, goats, sheep and pigs (although they were different to how we know them today).

Agriculture and cattle farming helped to replace nomadism with sedentarism. During this time the first permanent populations appeared. In these places there also appeared craftspeople (weavers, potters, etc.).

The stage between the discovery of metallurgy (5000 BC) and the invention of writing (3500 BC).

The discovery of metallurgy and working with metals (copper, bronze and iron) drove the development of different civilisations.

During this stage, agriculture and cattle farming were improved, which led to the emergence of trade.

2. PRESENTATION ABOUT THE PREHISTORY***

***MY LINKS: UNIT ABOUT PREHISTORY

Antiquity is the second longest period in human history. It began around the year 3500 BC with the invention of writing in the Near East and ended in 476, with the fall of the Western Roman Empire.

During this time, the first civilisations in history emerged around the Mediterranean and the territories of Asia.

This territory was positioned between the rivers Tigris and Euphrates. Thanks to its irrigation systems, the towns of the region were able to use their water to develop agriculture.

Agricultural growth made it possible to found the first city-states more than 6,000 years ago. The best-known are Babylon, Ur and Uruk.

Besides developing agriculture, the invention of writing occurred in Mesopotamia and the first legal code in history was written by Babylonian king Hammurabi.

In approximately 3000 BC, Egyptian civilization emerged in the fertile lands of the Nile valley. Due to the annual flooding of the river and channelling and irrigation systems, the Egyptians were able to develop agriculture in the same way as the Mesopotamian people.

The Egyptian Empire was governed by a pharaoh, who was considered to be a living god. Their power was absolute and they dictated laws, controlled armies and were the owners of all of the land. When they died, their remains were deposited inside a pyramid. The three best-known pharaohs were Khufu, Khafra and Menkaure.

Towards the 8th century BC the first Greek polis or city-states emerged. Although they were independent, they shared the same language, culture, religion and way of life. The most important were Athens and Sparta.

Owing to population growth and scarcity of land, the Greek cities promoted the establishment of colonies throughout the Mediterranean region. This contributed to the development of commerce and the expansion of Greek culture, which formed the basis of western culture.

The Roman civilisation began in the Italian peninsula and expanded throughout the Mediterranean. During its more than one thousand years of history, Rome had three forms of political organisation.

The territories occupied by Rome were incorporated into its Empire and submitted to a process of romanisation. This means that the Romans imposed their laws, customs, culture and language, Latin, on the lands that they conquered.

The most important events of the Middle Ages

The Middle Ages is a period of more than one thousand years, beginning in the year 476 with the fall of the Western Roman Empire and ending in 1492 with Christopher Columbus’s arrival to America.

Throughout this period, different events and important people marked the era:

– 622: the flight of the prophet Mohammed from Mecca de Medina (hijra) signified the birth of Islam.

– 711: the beginning of the Muslim conquest of the Iberian Peninsula.

– 800: Charlemagne, king of the Franks, was crowned emperor of the Holy Roman Empire.

– 982: the viking Erik the Red arrived in Greenland.

– 1095: the first crusade began. The crusades were a series of military expeditions that aimed to conquer the Holy Land, which belonged to the Muslims.

– 1271: Venetian merchant Marco Polo arrived at the court of the Mongol Khagan, who he served for several years.

– 1348: an epidemic of the Black Death killed more than a third of the population. Its consequences were aggravated by bad harvests, famine and war.